After a long day of mounting, on Monday we opened Luciana Levinton’s exhibition “Metaphors and architecture” in the historic building of the Halle ronde, in Givry, in the picturesque region of Bourgogne, France. Curated by Sergio Bazán, text and project management by Estefanía Radnic.

In this emblematic building with a circular floor plan that was used in the 19th century to store wheat and that today functions as a cultural center, Luciana’s works generate dialogues between painting and architecture. Trained in architecture, Luciana investigates the work of women architects and designers and gives them visibility through painting. In this case, the exhibition pays tribute to the French architect and designer Charlotte Perriand. 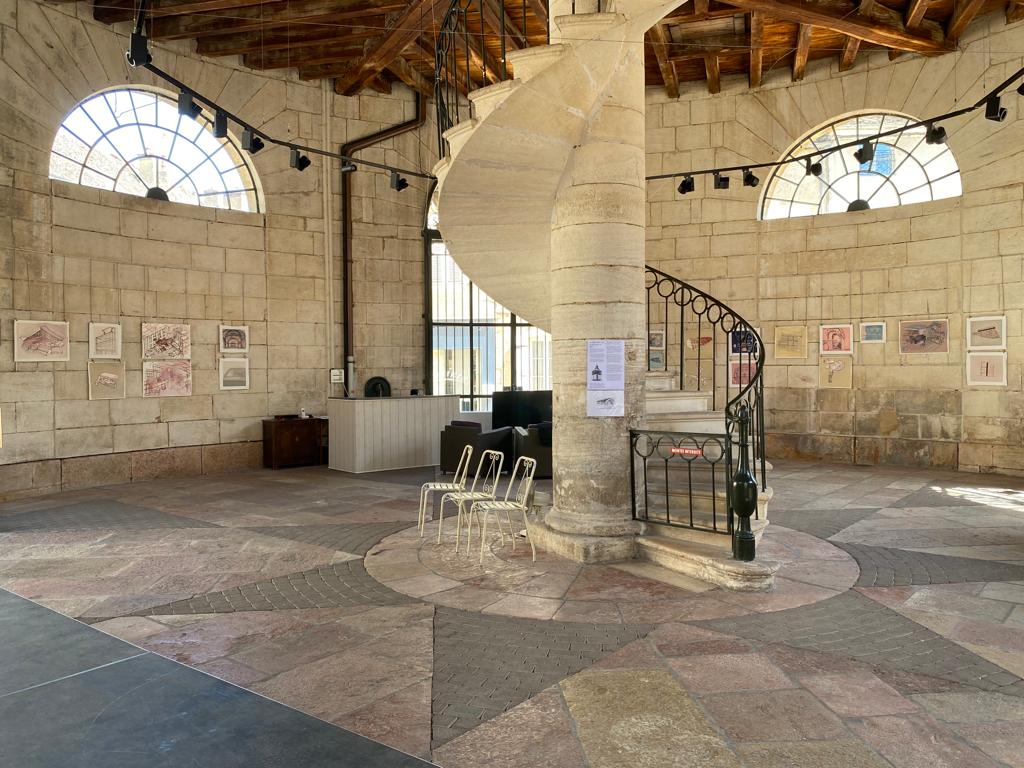 The opening event was a pleasant moment of exchange with the community of Givry and surroundings.

“Luciana Levinton studies the work of women architects and appropriates their works through pictorial language. With her architect’s gaze, she analyzes the plans and sections, the voids, the interiors, the perspectives. She deconstructs these buildings and furniture up to, even , turning them into abstractions.In this way, he sheds new light on these works, resignifying them.

This exhibition is the occasion to pay tribute to Charlotte Perriand (1903-1999) who made her way in a field dominated by men, that of architecture and design. Charlotte spent much of her childhood in the Burgundy region, among vineyards and picturesque villages. With an innovative spirit, his works stood out combining modernity, tradition and functionality. He worked for 10 years with Le Corbusier but in parallel he set up his own studio developing projects in Japan, Vietnam, Rio de Janeiro and France. It revolutionized modern interior design based on its concept of domestic storage and multifunctional furniture. Charlotte was a lover of the mountains and skiing, as a child she also spent long periods in the Savoy region where she completed her great project: the Les Arcs complex, to which she dedicated 20 years. Les Arcs is the culmination of his ideas, Charlotte coordinated from the details of the interior design of each apartment to the urban level with the aim of making skiing accessible to a greater number of people.

Following the concept of “constellation of ideas” of the German philosopher Walter Benjamin, Luciana’s paintings unfold in the space of the Halle Ronde, open new dialogues and bring to the fore what has been left aside or forgotten by history. . References to Perriand dynamically intersect with others (the Grand Palais in Paris, works by Le Corbusier, the buildings and vineyards of Givry) in this multi-temporal network that covers the walls of this emblematic 19th-century building used to store wheat with a long history of construction and adaptations.

Luciana invites us to immerse ourselves in unfolded architectures and reinvented spaces, to lose ourselves in this map of multiple and asynchronous connections that weaves ties between painting and architecture. Her paintings are quotes out of context that make visible the work of women architects and designers and mobilize reflection by proposing an alternative reading of history.”

Next:
‍
Marcos López: more than 90 unpublished works in the exhibition “Classic and modern” exhibited at the Borges Cultural Center